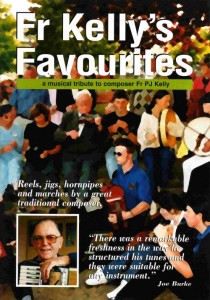 On recordings by the Chieftains, De Danaan, and many other Irish traditional groups, listeners may often find a composer's credit for one P.J. Kelly or sometimes Father P.J. Kelly. A musician since his days in primary school, Father Kelly spent the great part of his life as a missionary in Fiji, Australia and Pakistan. Obviously not a particularly materialistic person, he wound up in a good position to be reflective and unconcerned over the fact that he never made any money from his dozens of compositions, no matter how many times they might have been recorded.

It goes almost without saying that Irish traditional players usually receive a great deal of encouragement from music loving parents. Kelly however credits one of the nuns in his school with pushing students to learn the traditional music of their country as well as the usual classically derived exercises and set pieces. There was also a great deal of enthusiasm in his community generated from listening to broadcasts and recordings by influential early groups in this genre, particularly the Ballinakil Ceili Band, which did some of the first broadcasts of Irish traditional music. But Kelly did not actually begin composing his own pieces until 1960, when he was home on holiday after his first eight year mission term in Fiji. He was playing music one night with a group of the local musicians, including the great fiddler Aggie White. One of the musicians jokingly asked what would happen if the players ran out of selections from the classic O'Neills' 1001 Tunes, referring to the large volume of notated Irish tunes that is basically this genre's Torah, Koran, and Dead Sea Scrolls all rolled into one. When Kelly responded that obviously the thing to do would be to write their own new tunes, the musicians realized this wasn't a joking matter after all and decided to begin meeting in order to pursue the idea further. At the next get-together, which included the fine flautist Stephen Moloney, Kelly was the only person who had actually bothered to come up with a composition. It was a tune entitled the "Lough Derg Jig." The reaction of the other musicians was more than just positive, and it was predicted by some that the tune would be well-known long after the man who composed it was dead and gone. It turned out be the best known of Kelly's pieces, which number about 35. These include "Rossmore Jetty," "The Ben Hill and Derrycrag," and "Mulvihill's," as well as a whole series simply known as "Kelly's No. 1," "Kelly's No. 2," and so forth.